As far as the Sail Residences is concerned, its location is a strategic one considering that it is just a walk away from the premier entertainment and shopping centers in Pasay City. Not only that, your new home will be just minutes away from the Entertainment City where many of Pasay’s recreational centers are located. Such recreational and entertainment facilities include the Solaire Resort & Casino, Aseana City, Okada Manila, City of Dreams Manila, Resorts World Manila, Bayshore City Manila, and PAGCOR, among others.

Even numerous embassies are just around the Sail; among them are the US Embassy, Vietnam Embassy, and the Japanese Embassy. The site is also surrounded by various corporate and government offices; such as the World Trade Center Manila, GSIS Headquarters, PNB Financial Center, Manila Film Center, DFA, NBI, Pasay City Hall, Philippine Trade & Training Center, and the Philippine Airlines Head office, among others.

One great thing about Sail Residences’ location is its close proximity to Manila’s University Belt area which is very favorable for your kids. They don’t have to commute very far every day just to go to school. Additionally, your children don’t have to endure the long travel time and the annoying traffic gridlock daily just to get to school. Some of the best schools in Metro Manila that are near Sail include the University of the Philippines Manila, De La Salle University Taft, DLSU College of St. Benilde, Arellano University School of Law, Mapua University, St. Scholastica’s College, St. Paul College Manila, and the Asian Institute of Maritime Studies, among others.

Moreover, the Sail Residences is still near several places of worship so you can do weekly religious service without going too far from home. Some of the churches within easy reach from Sail are the St. Joseph the Worker Parish, Iglesia Ni Kristo Lokal ng Propietarios, San Rafael Parish, and the Baclaran Church. 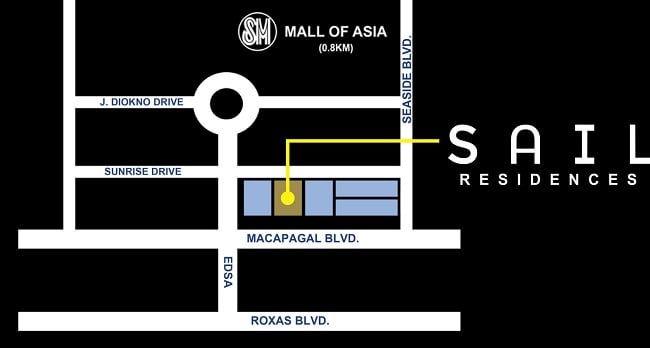